The Northern Virginia North-South Corridor has been designated a "Corridor of Statewide Significance" by the Commonwealth Transportation Board (CTB). The North-South corridor is defined as the area generally east and west of the Route 234/Prince William Parkway and the CTB-approved location of the Tri-County Parkway between Route 95 and 50, and connections to the Dulles Greenway and Route 7 along Northstar Boulevard and Route 659 (Belmont Ridge Road). The North-South Corridor is envisioned as an integrated, multimodal network of transportation facilities that connect major centers of activity within and through the Commonwealth and promote the movement of people and goods essential to the economic prosperity of the state.

The Loudoun County Board of Supervisors has adopted a resolution of support (PDF) for the state's efforts to construct a North-South Corridor from Dulles Airport to Interstate 66 in order to support the passenger and cargo growth at Dulles International Airport and to further encourage the economic growth and jobs this brings to Loudoun County and Virginia. 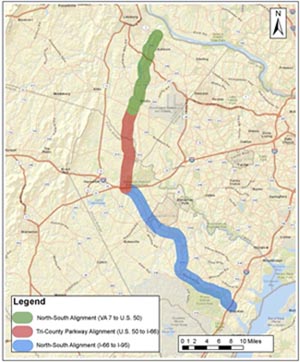